Binks Media is an independent media out that encourages art and story, creativity and conversation. Created by Adam Buccafusco, BinksMedia.com is a compilation of projects, artworks, and other labors of love.  Adam is joined by many friends and family who add a wealth passion, insight, and fun to the projects and his life.

The earliest works date back to 2013 with new releases added regularly. 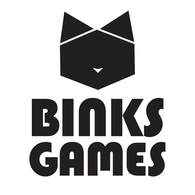 A group of friends dove head first into the world of Role Playing Card games. Though the gaming was a rip roaring good time, one stood up and said "Man, as much as I enjoy this, I would like it a lot more is there was a Sci-Fi theme instead of straight up fantasy". Luckily, this person just happen to be an artist/designer with a bit of a writing bug, and so he set off to develop a game.

After months of building, illustrating, designing, and play testing he took the game back to the friends who helped him shape it and craft it into the action packed, rich, game it is today.  After years of development, planning, and marketing Pulsar Event was able to not only launch a crowd funding campaign, but also fund above goal! It was during this process Binks Games, an independent publishing company named for creator, Adam Buccafusco's cat who sat in his lap throughout most of the development.

In 2017 Binks Games published their first game, Pulsar Event, Battle Card Game and returned in 2019 with Buy It or Don't: Pitch Your Terrible Idea, a party game. 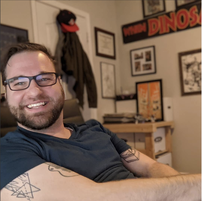 Adam Buccafusco, creative director of Binks Media is an artist, designer, and writer who believes art and story makes lasting human connections. A graduate of East Carolina University, School of Art and Design, Adam has published and showcased his work for years meeting  so many creative and incredible people along the way. He currently lives in Coconut Creek, FL.
Proudly powered by Weebly